Government representatives, citizens, NGOs and producers from the eastern planes of Colombia are using a board game to explore the challenges faced by Cravo Sur river. ‘La Cuenca’ is a board game developed by masters students from ETH Zürich. Game participants play the role of producers along a river. Livestock, rice and oil palm are visible on the board and the main decision each producer has to make is how much water they need to collect in order to produce.

The challenges begin early in the game session as the dry season comes into play. The water shortages creates tension among the owners in the top of the basin, near the mountains, and the producers down the river. This was evident during a four day workshop organized by WWF Colombia in Yopal city. The players were real actors of the Cravo Sur basin working in a water governance project to protect the river.

“It is a game, but it shows how reality works” one player said, “there is a fight for water, that is what the game is showing” another one called and “we have to make agreements to use water, a precious liquid for us all” concluded one participant. The topics discussed where similar in the different sessions of the game, but the solutions to solve the problem where different among each group.

In one session the players decide to invest heavily on the forest recovery where the river is born and create a fund with resources from all producers to maintain it. In another session they decide to create a restriction on water usage for producers and the towns represented in the board. In the workshop held with players from the environmental authority, they put into place one of their programs known as water harvest. All these solutions have been previously discussed by the actors, but it is the first time they can try to put them into action and recognize the barriers and difficulties along the way to implement them.

The Cravo Sur river is born in the Andes at 3.800 meters above sea level and flows through Colombian eastern plains in Casanare department. La Cuenca is a game inspired by this river and its landscape. Through its participatory dynamic, the game has promoted a better dialogue and understanding among the actors who are making the key decisions to conserve it. The process will continue as the game players get back to reality to promote some of the actions discussed during the play session. As for the game, it will be adapted to be played in another region in Colombia sharing the water usage problem. 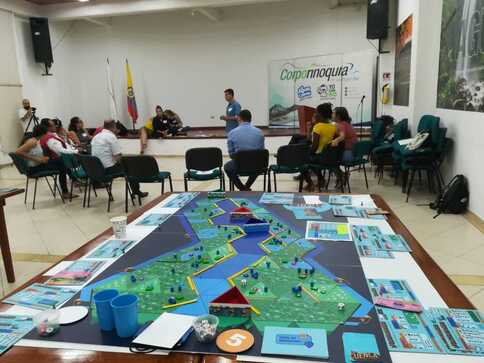 Debriefing after the game session