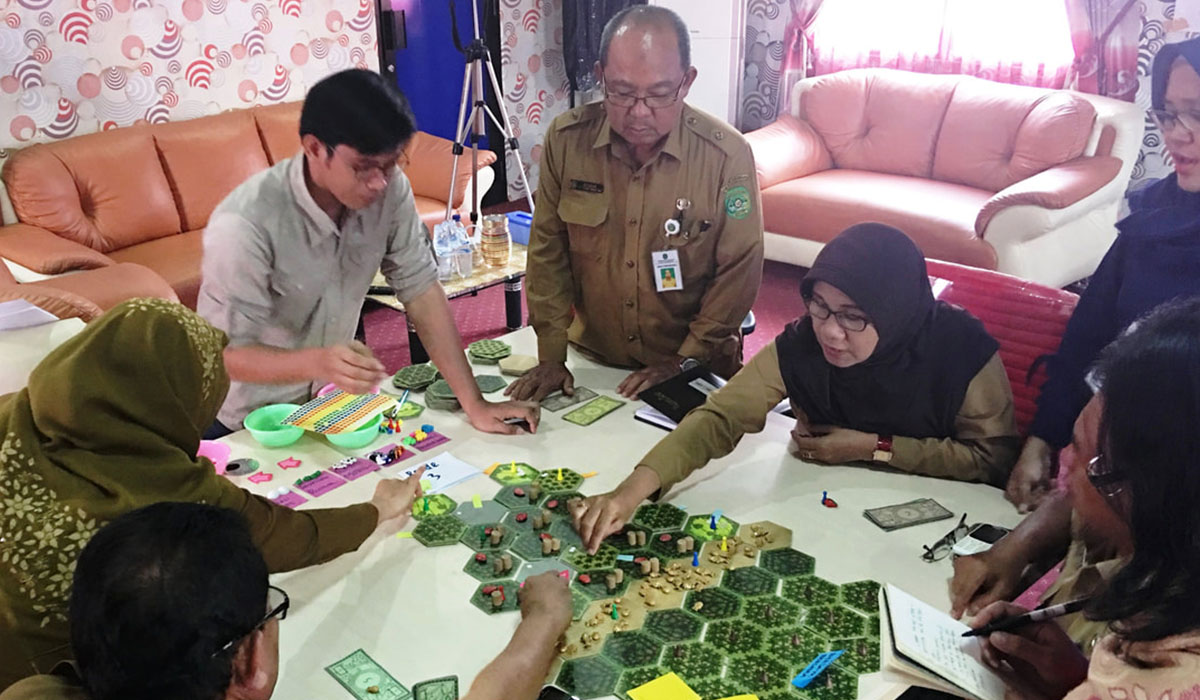 Game sessions and workshop with local policy makers in Indonesia

OPAL has won the trust of local policy makers in Kutai Kartanegara district, East Kalimantan, where three game sessions and one workshop were organized in October and December 2017, with the help of CIFOR. ​The Indonesian game ComMoDo (short for COMpanion MOdelling in InDOnesia), developed by Nur Hasanah, PhD student of ETH Zurich was played with district officials from the Kutai Kartanegara District in October 2017. The officials came from different units responsible for plantation business, management, planting and seeding, and development of land and smallholders. Two more game sessions were organized in December 2017. The first one gathered heads of three villages around the OPAL project site, one staff of the Rea Kaltim oil palm company, and one official from the district plantation agency. The third game was held in the village of Buluq Sen with community members. ​

Players commented that the game had been useful because it depicted their daily life and encouraged them to think to find the best strategy to use their lands and natural resources and to optimize their gains to meet daily life needs. They also found the game useful to better understand what was happening on the ground and reckoned that that it would be an effective instrument to help different stakeholders share knowledge, exchange ideas and eventually find common solutions.

Mr Ariansyah, the village head of Kehala Ilir, whose people are mostly fishermen, said that “from this game, I am happy to discuss and agree that we should all together make efforts to conserve the resources for the sake of sustainability of natural resources both upstream and downstream.”

Finally, CIFOR together with IPB, ETH Zurich and the local government of Kutai Kartanegara organized a workshop on strengthening governance of oil palm landscape to meet sustainable and equitable goals. Held in Tenggarong, the capital city of Kutai Kartanegara, the workshop brought together around 80 people representing different stakeholders from government (provincial and district level plantation agencies), oil palm companies, community cooperatives, smallholder associations, village heads. universities, and others. The workshop was intended to discuss key issues around oil palm plantation development in the district such as agrarian changes, impacts of oil palm expansion on the household livelihood, legality and smallholders’ access right over lands, and partnerships between oil palm companies and nearby communities. In particular, the workshop was intended to provide input to the development and revision of local regulations governing plantations and partnership.

More details about the game sessions and workshop here.